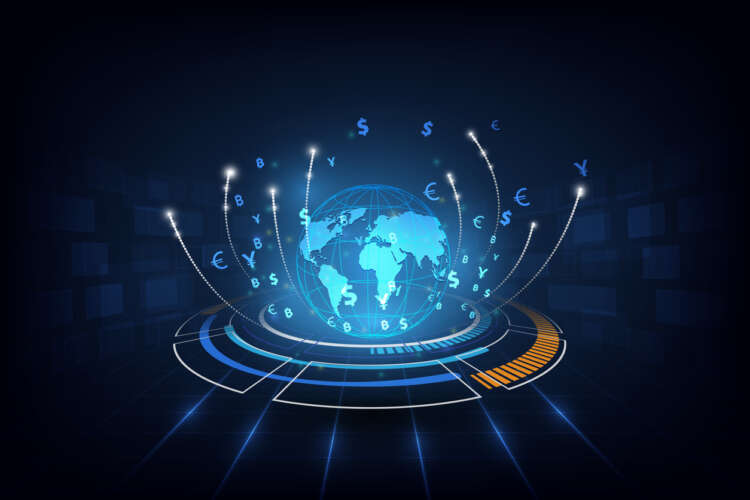 At a time when a cashless society is looming and online payments are becoming dominant, online banking services are actually in decline while bank deposits are also declining, the reason for this is fragmentation and decentralization in the way we manage our money. Not necessarily decentralization in the blockchain sense, although DeFi is on the rise, but simply growing competitiveness among startups specializing in specific areas of finance.

The rise of accessible exchange

One area where banks are overwhelmed is in currencies. Traditionally, currency stores were used to exchange physical currency for holidays, but since bank cards have become standardized and commonplace, using our bank cards for payments has been the norm.

Similarly, the transfer of money to a foreign owner or business partner may have been done by wire transfer for convenience. Or rather, it was the only mainstream option. The problem is the high costs that the big banks charge around the world. $/£/€30 is common for a fixed overseas transfer fee, while you typically lose around 3% to 5% of the exchange rate difference. Perhaps unnoticed by your average holidaymaker, but a significant threat to international business bottom lines when used frequently for international banking payments.

If we take Lloyd’s International Payment Rates as an example, we can see a flat fee alone going up to £29.50, not even considering the large markup. Perhaps unnoticed by your average holidaymaker, but a significant threat to international business bottom lines when used frequently for international banking payments.

While FX Specialists have been around for decades, they were primarily reserved for larger companies that established relationships with their broker. It wouldn’t be a place a vacationer or expat would consider for a few multi-hundred dollar swaps, or even the rare transfer of money to a bank overseas.

The relevance of using expatriates and vacationers as a criterion of activity is due to the fact that small companies arguably have more in common with them than large companies. Around 5% of the UK population are self-employed traders, while there has undoubtedly been a growing number of remote workers since the pandemic as well. These tend to have more in common with vacationers than with big business, as convenience tends to prevail.

This is why money transfer companies have had such an impact. They have taken the infrastructure and capabilities of traditional FX specialists, but refined them into simple mobile apps.

Money transfer companies that offer a borderless payment card, basically like a debit card, tend to lead the way in terms of customer base. Indeed, they are popular with any customer looking to keep that overseas card spending business, but with the exchange rate from a foreign exchange specialist.

A forex specialist’s exchange rate is often less than 1% in their margin and/or fees, a significant improvement over banks. But, before it was practical, even many small businesses still depended on PayPal and terrible bank rates. Paying from an overseas bank account via PayPal cannot be done directly and can be expensive to send to a PayPal wallet.

The experience of using a typical money transfer company now involves opening an app, and within seconds users can open many different virtual bank accounts around the world. So setting up a new client who lives abroad as a freelancer becomes a matter of opening an account in their currency, so that a “local” transfer can take place, which empowers the recipient, who can then exchange the funds on their own terms. This deviation from central financial intermediaries is what is meant by decentralization, as it empowers the individual to make their choices and capabilities with the currency.

Of course, banks are supposed to be a safe place to store money. But, since your funds are not held in reserve for you, but rather allocated to various investments by the bank, you are supposed to receive a reward for “lent” such capital to them. For years this reward has been 0.5% at best, about 8% less than inflation, which means there is no reward but rather a huge real cost to get your money back. .

Again, turning back the years and investing was something reserved for the upper class and corporations – possibly also middle class involvement depending on the country. However, the pandemic has really changed the game, in which retail investors now represent such a large number of total investors that they even influence the markets in strange ways.

While some have started reading about investing in their spare time during lockdown, many others have realized the power of passive investing. Namely, index funds. Between Vanguard’s global trackers and easy-to-use roboadvisors (essential AI-driven apps that invest your money for you, but mostly in index funds anyway), more and more of the middle class are investing their money in these long-term investments due to application accessibility.

Again, decentralization is happening, in which banks are no longer seen as the only place to store your money. Instead, they’re just where we get paid and where our emergency fund is, while anything beyond that is usually invested through apps like Robinhood, Betterment and Vanguard.

Additionally, even for money that is not meant to be invested, money transfer apps are a common place to keep some deposited funds if they are frequently exchanged, spent, and sent. Although they are often not covered by deposit insurance because they are not officially a bank, they still take deposits directly from banks.

And, for investments abroad, the banks are even more at the back of the line. Investments are of course behaviors where costs are most closely considered, making the typical loss of 3% to 5% of banks’ foreign exchange spread out of the question. This is where exchange specialists and money transfer companies differ from each other, as some focus on larger, one-time transfers and others are targeted at daily use of small, frequent transfers.

The reason they are not homogenous in their service, beyond the obvious need for differentiation to gain competitive advantage, is that one can quite easily think of two service categories: App-based and Customer Service- based.

App-based services, like Revolut, are all about speed, convenience, and sort of replacing the need for a street bank. It’s ideal for remote workers looking to receive their pay overseas, redeem it quickly, and start spending on their Visa card. However, it is not the supplier to go to for an investment abroad.

On the contrary, buying a property abroad or similar requires more vigilance and perhaps advice. The FX specialist will provide a dedicated dealer over the phone free of charge, in which they can be experts in buying goods overseas, and can offer more sophisticated services – futures contracts, for example. This is safer when handling hundreds of thousands of dollars, and fees tend to drop as the value of the transfer increases.

That’s not to say there’s no turning back for the big banks. They still retain a certain gravity when it comes to storing savings securely, while being the main source of mortgages and loans (although loans are also becoming decentralized). The large size of their infrastructure could be to blame for some of their slow development, but complacency is also at play here. However, as deposits decline, this could be the wake-up call needed to better respond to the world of international transactions.